These examples work from a linux prompt or a macOS terminal. It’s possible to do the same thing in Windows using applications like putty or mobaXterm.

You can use a local ssh tunnel when you want to get to a resource that you can’t get to directly, but a ssh server that you have access to can. Here are some scenarios. 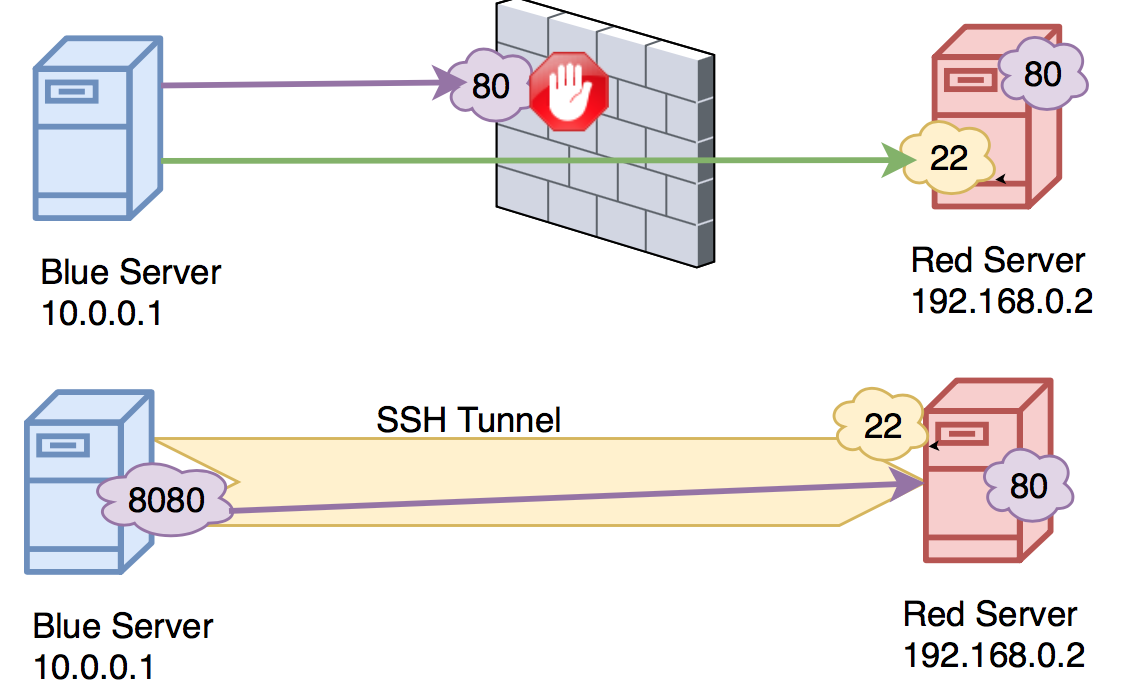 The command on the blue host will be:

Now when the blue host opens a browser and goes to http://localhost:8080 they will be able to see whatever the red server has at port 80.

This syntax to create a local ssh port forwarding tunnel is this:

In this scenario we are creating a reverse ssh tunnel. Here we can initiate an ssh tunnel in one direction, then use that tunnel to create an ssh tunnel back the other way. This may be useful for when you drop a drone computer inside a network and want it to “phone home”. Then when it phones home, you can connect to it through the established ssh tunnel.

Green host can now ssh to blue host like this:

When using ssh, you can specify the -N flag which tells ssh you don’t need to send any commands over the ssh connection when it’s established. This option is often used when making tunnels since often we don’t need to actually get a prompt.

The autossh command is used to add persistence to your tunnels. The job it has is to verify your ssh connection is up, and if it’s not, create it.

Here is an autossh command which you may recognize.

The -i /home/blueuser/.ssh/id_rsa option says to use a certificate to authenticate this ssh connection. Check out this post to learn more about ssh certificates.

Now when your tunnel goes down it will automatically try to reconnect and keep trying until it is successful. To make it persistent through a reboot, add the ssh command as a cron job.